After After Dusk: A Post-Mortem

on August 12, 2018
On the 2nd of July 2017 I posted the first two pages of a planned 30-page comic called 'After Dusk', my first attempt at a long-form comic. Over a year later, on the 11th of August 2018 a haggard, frail form drags itself across the finish line, posting the last 6 pages of that self same comic. 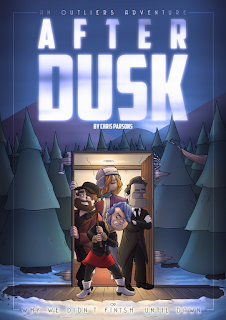 Having spent, on and off, a year of my life working on this thing I think it's worth looking back on the experience and in particular what I can take forward from it. Believe it or not I do plan to make more in future (just... give me time) and would like to be vastly better equipped at doing so.

I wouldn't describe the entire process as a failure, just a failure at success. Nothing went quite right about the whole process and, since all decisions were mine, I can accurately pinpoint my own naivete.

You only need to look at the difference in quality between the cover (made yesterday) and the first few pages of the comic to realise how much my ability to draw, colour and shade has improved over the interim. This is both a blessing and a curse: A blessing because, naturally, I'm improving; A curse because in order to improve one must constantly push oneself. 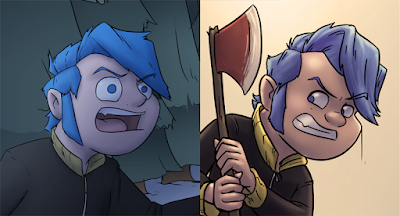 After Dusk consists of 224 individual frames (I counted) each of which I thumbed, sketched, lined, coloured and shaded to the best of my ability. That is a draining experience and contributes quite considerably to the extended breaks between pages. When you know the experience will drain you, and you're less than half-way through, you don't even want to start it up again.

I elected from the offset to adopt a smooth-shading technique to the colouring process, a more realistic look, more professional for this, my most professional work. This was a mistake. Again, I learned a hell of a lot from it, getting both better and faster, but you shouldn't do this on a long-term project. A single webcomic, fine. A commission piece, fine. Some fan-art, an experiment, a one-off illustration. Not a 30-page graphic novel.

I propose, come the next long work, to take a hybrid approach. There's no denying that the smooth shading, when done well, is an aesthetic improvement over my usual technique, but it's far too energy- and time-consuming to keep up throughout. Hence I shall add an 'environmental gradient' alongside the usual cell-shaded block-shadows and highlights. This gives a smoothish atmosphere to the shading, nothing appearing truly flat. Not to the extent of fully manual smooth shading, but it also doesn't take a metric tonne of time to apply.

The moral here is that on a long-term project don't try your best, try a little below your best.

When I wrote After Dusk I was on a bit of an 'Inside No. 9' high. I enjoyed being thrown into a world I didn't understand and being asked to both learn about it and figure out the twists and turns within the 30 minute time frame. This may have contributed the the slightly twisty ending of After Dusk. This was not wholly a success.

In retrospect the story's pretty good. The twists are telegraphed and every little event that occurs in the story has a purpose by the end of it. Were this an episode of a 30 minute TV show that would be fine. But it wasn't. It was a webcomic delivered page-by-page.

It's all very well these small, insignificant events all coming together at the end, but it shouldn't take 50 weeks of waiting for it to start to make sense. Something interesting has to happen before that, otherwise, for the longest time, you're just reading about a series of inconsequential happenings.

So the thing to take forward here is that the plot should be engaging throughout not just at the end, however satisfying it may be when it's all released. Know your format.

In terms of humour the work is rocky. I began writing this before I learned what has become my favourite and most crucial rule of comedy. To paraphrase John Cleese:


When writing comedy it's very easy to be clever, but it's very difficult to be funny.

When spoken aloud this rule is self-evident: Of course you want comedy to be funny, it's so obvious, that's the entire purpose! But it's not obvious, at least when you're writing. You tend to pick up on ideas because they're clever, interesting, something you haven't thought of before, and before you realise it you're working hard on an idea that hasn't so much as made you smile since it's conception.

It is because of this I rather abandoned the idea of traditional webcomics, a format which focuses largely on getting frequent, consistent content. Since observing this rule my output has plummeted, but the quality has increased greatly, at least by my own tastes. I've always been terrible at editing my own work - be it comedy, writing or music - so this is a big step forward for me.

The latter half of After Dusk is, I think, pretty funny. There's some good lines in there, some of my favourites being


Some of the events are funny too: The recorded scream, Stoic's power-off tone and the final reveal I think all work quite well. This was, as the narrative of this section suggests, subsequent to the discovery of my rule.
The former half was written without this wisdom in mind. As a consequence the ideas are somewhat clever - the inactive ouija board, the rubbish truck, the knife-wielding silhouette fake-out, J.A.M.E.S - but I don't think any of them were ever really funny.

So this one's easy to take forward in a practical way. When I produce a joke now and I make record of it, I also write down my initial reaction. If I laughed aloud (particularly in public) it goes straight in. If I chuckled or smirked, it's fine, but probably needs work. If I didn't so much as smile, let's maybe try something else...

So what now? After Dusk has officially ended and I haven't made a standalone webcomic since April. Well I think I'll address the latter before the former. Much like the good ol' days of comic-writing I have a quite considerable back-log of individual ideas, many standalone with a couple of 2-5-strip mini-stories. I think I'll get back on that train before I have another crack at a full 30-pager again.

That said I have plenty of ideas for the next long-form Outliers comic. Some titles I'm throwing around are 'The Gemstone Labyrinth', 'The Malakhi Fable' and 'An Evening at Fuzzy's'. See if you can discern what they're parodying.

Furthermore we have the long-advertised 'White Coats' to get cracking with. The script for the first installation needs work, but I'm sure that'll come as part of the transition between sitcom script and comic. The plan may well be to alternate long-form comics, one Outliers to every White Coats. We'll see.

At the very least I'd like it not take more than a year to make the bloody thing...
After Dusk Blog Comic Outliers Review Update