When I was working in the world of mathematics I was always confused as to why people didn't like publishing their failures. Maths is a fickle business and you can spend a couple of years collecting data, experimenting and trying to prove some conjecture before realising it just isn't true. To keep that realisation to yourself runs the risk of so many more people making the same mistake, wasting so much time for so many. It's important to tell of your failures, as well as your successes.

This might be a long one, lads and gentlewomen.

In the world of art a phenomenon called the 'Other Eye' is rife: When drawing a human face, you make one eye, a beautiful eye, perfectly shaded, well-proportioned, just amazing. You simply couldn't be happier at how wonderfully you've drawn this eye.
And then you draw the other eye.
And it looks hideous.
Nothing you can do can make the other eye fit, it's wonky, badly shaded, a child could do better. It's incredibly disheartening. 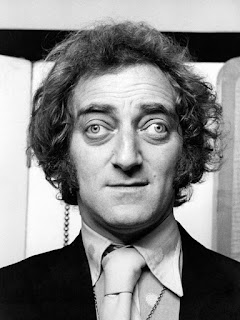 Of course all rules are off when drawing the late, great Marty Feldman.

This, it seems, is not unique to art.

Thus far in the development of 'To Linger' things have been going swimmingly. I've been moving chunk-to-chunk through the game, obsessing over details and making a nicely finished area to screenshot for you fine folk before moving on. It's been lovely just rolling from zone to zone - modelling, texturing, implementing, programming and testing - before standing back and thinking 'wow, if the rest of the game is like this I'll be happy'.

At the end of last year I began work on an area of the game which even early on I knew would be a stand-out visual moment of the game. One of the three or four images which I hope will stick with the player once they're done. A game like this with little in the way of tricky mechanics relies on such spectacles, and so I excitedly got cracking on the first of its kind.

And then I began modelling.

And it looked awful.

I know there's going to be a discrepancy between what I visualised in my mind and what actually emerges, especially in a low-poly game, but this was bad. In an area all about atmosphere and trying to creep you out, what I achieved was laughably poor.

This isn't so bad, I've encountered worse on long-term projects and I know I'll recover eventually after some hard work and re-evaluation, but boy did this completely drain all momentum and enthusiasm from the project. I confess I haven't touched the game for a couple of weeks, unable to pluck up the enthusiasm to even begin.

I've gotten to that point in the long-term project. The point where it dawns on you that this could be an unmitigated disaster. Invasive thoughts are rife. Why are you spending so much time on something nobody will like? There's nothing new or interesting, why bother? It's dull. It's pointless. An unabashed boondoggle. It'll be dead and forgotten before it steps foot outside the door, and you really should be doing anything else. 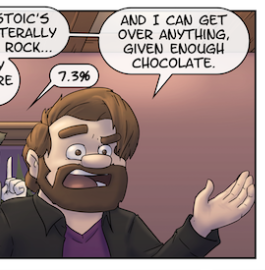 I'll be fine. I've got confectionery.

Now I've been through this before, and I know this is nonsense. There was enough enthusiasm for the idea at the start of the project to kick-start my desire to spend 6 months of my life working on it, and I've only become more enthusiastic the more ideas I developed. It can't be an absolute failure. People's experience of it the first time they play will be much like my experience envisioning the game the first time, if I do my job correctly. Someone will enjoy it somewhere, so it's at least worth seeing how many people fit that bill.

The problem is, when you're at the bottom how do you get back up? The momentum's lost, it's a steep effort hereon. Fortunately I'm a man who enjoys his analogies, and I have one to reverse-engineer.

The failure I had was simply an iteration of the Other Eye. I'd been 'drawing' plenty of 'eyes' up until now, finishing them, shading them, ensuring they were nicely presented, structured and implemented. This just happened to be the one where it went wrong.

So how does this help? I tend not to get Other Eye syndrome in my own art, at least not excessively. When I draw a head I draw the general head shape in simple 3D objects, carve out the jaw-line and eye sockets with simple geometric lines, proportion and structure the head appropriately, express the brow-lines, add the nose shape and ears and only then put the eyes - both of them - roughly in place. I then work on both eyelids, both pupils, eye shape, etc before adding the detail. I don't really get Other Eye syndrome because I work on both eyes simultaneously. It's not fool-proof (and boy am I the fool to test it) but it's served me well.

The problem of the Other Eye arises when you forget that you're not drawing two eyes, you're drawing a pair of eyes. They exist as part of a larger whole, a structure in which they not only sit, but which they help form. To focus on just one of them at a time is folly.


So why the hell was I doing this in my game!?

Seriously, in retrospect this was such a stupid way to make a game, at least on my own. Yes, I've got some nice screenshots to show you guys, and it makes me feel good when it goes right, but it was never going to last.

Thus I have endeavoured to take my work ethic from drawing and implement it into game creation. Before any new chunk is completed I shall create an alpha of the game. And I mean a true alpha, not one of these early-access, almost-finished-but-I-need-money alphas you see nowadays. An alpha where half of the areas are untextured white cubes, objects are placeholders, cutscenes are janky at best, missing at worst, and crashes are a plausibility. But importantly an alpha which is complete. Something you can begin at the main menu and play until you hit credits, hitting all of the beats which need to exist in the final game along the way.

Yes, gameplay will be missing. Yes areas will be underwhelming. And yes, the atmosphere will take a lot of work to fill in. But I hope by working on the project as a whole with the alpha as a base, rather than erratically in small components, I can help avoid this damning momentum loss and hopefully make a reality this really cool, weird and interesting game that exists in my head.

This is the plan, and it may not work, but at least I have one. All projects have ups and downs, and in the graph of your own projects and life-goals there will always be a low point. 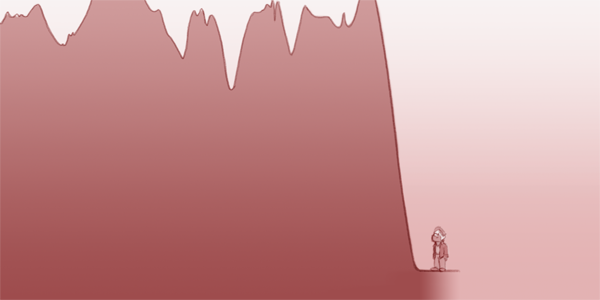 Your job is to make sure this isn't the base of the mountain, simply a valley. 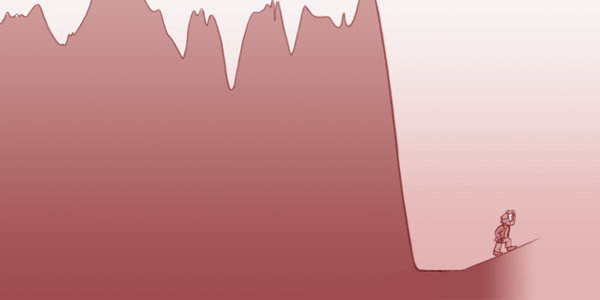